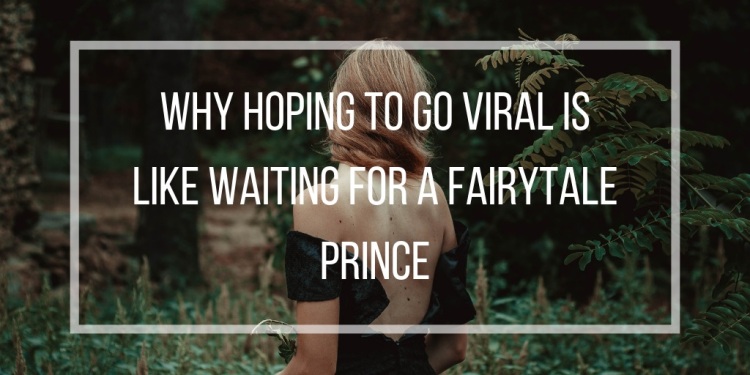 A note: while I’ve used the concept of a fairytale prince, you can substitute it for ‘princess’, ‘Iron Man’, or a gender-neutral savior…whatever suits you- the point is, you’re waiting to be saved! Now, carry on…

Gangnam Style. The Harlem Shake. Rebecca Black’s Friday. Chocolate Rain. They shared, we shared, they went viral, we moved onto the next viral hit. One of the things I’m asked most is “can you make me go viral?”, which ultimately gets a hard “no” from me. Why?

There’s nothing wrong with wanting to go viral. The prospect of having your work go viral is exciting, right? But keep in mind the fact that just like having the ‘flu (which is a virus), the infectiousness of your viral content will pass, too. Add to the fact that, according to Socialbakers’ Jan Rezab the lifespan of virality is on the decline thanks to social media going mainstream and hoping to go viral is basically like waiting for a fairytale prince. Not convinced? Read Jan’s post Stop Trying to Go Viral on Recode- he gives evidence but also gives some fantastic alternatives that really work.

Add to that the fact that since the advent of social media in the mainstream there has been a consistent and steady stream of content available to the public, and it’s harder to make a dent virally. Even Tay Zonday of Chocolate Rain fame thinks that it’s more difficult to go viral now than back in 2007.

If you use virality as a sole benchmark for the success of your work, you’re going to end up feeling pretty bad about things- not because your work isn’t great, but because virality is so unpredictable and on the decline. There’s also this myth that going viral means you become an overnight success and everything is peachy keen. That can happen for some, but the experience is different in every case.

I always say to people when it comes to building an audience for their content: “it’s a marathon, not a sprint.” Even though virality is juicy and attractive and seems like the goose that laid the golden egg, it’s less valuable in the long-term. As with any relationship-building, it takes time and care. You can’t just throw any content out there willy-nilly and hope it sticks. Experiment. See what your audience resonates with, and what they’re not so keen on. Keep tabs on engagement levels and what your audience is saying about your work. And most importantly, let them know that you appreciate their shares, comments and support. Build a solid foundation for your work and your brand and you will reap more consistent benefits than a moment of overnight success with a viral video.