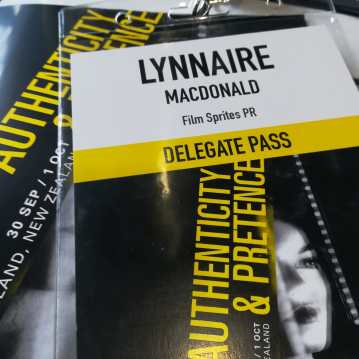 On the weekend of September 30 and October 1st, people from the entire spectrum of the film industry in New Zealand converged on Auckland to take part in Big Screen Symposium 2017. It was Film Sprites PR‘s first year at the Symposium, and due to the fact that we’ve worked mostly with international films thus far, it felt like a bit of a homecoming. For two wonderful days we were treated to a line-up which included speakers from various threads of the industry, including directors, producers, a casting agent, and writers. There was also plenty of time to network and catch up with old friends (as well as make some new ones).

The theme of Big Screen Symposium 17 was Authenticity and Pretence, a theme which is so pertinent in the digital age. As Big Screen Symposium Director Esther Cahill-Chiaroni notes in her introductory letter which accompanied the schedule: “[i]n an age of selfies and fake news, what is the role of the storyteller and how is it that sometimes ‘making shit up’ enables us to get closer to the truth?” Thanks to the wealth of information given via talks, masterclasses and the keynote address, I know we all came away with our own unique answer for that question.

Participants were spoiled for choice when it came to selecting which sessions to attend, because there were so many tempting choices and so many opportunities to learn even more! In particular, I thoroughly enjoyed the masterclass with writer/director David Michôd. I personally consider his first feature, Animal Kingdom, to be one of the finest Australian films of the 21st century, so to hear about the process behind this film (and his latest, War Machine, now on Netflix) was refreshing. I can definitely say his road to the completion of Animal Kingdom is the definition of “authenticity”, especially when it came to the remarkable performances of his cast, including Ben Mendelsohn and Jacki Weaver.

Equally engaging was the Casting Matters session with casting director Kerry Barden of Barden Schnee Casting. Kerry’s credits include American Psycho, Spotlight, August: Osage County and Winter’s Bone (and that’s a fraction of his credits!). It was interesting to discover the role of a casting director, the interaction between casting directors and the film’s director and listen to Kerry’s anecdotes about working in the film industry.

From the producing side of things, it was a delight to hear from Kylie du Fresne of Goalpost Pictures Australia (whose producing credits include the smash hit The Sapphires and popular TV series Cleverman), and Midge Sandford (whose first project as Sanford/Pillsbury Productions with her producing partner Sarah Pillsbury was Desperately Seeking Susan). One of the really interesting things that came out of both sessions from both speakers was the concept of having a producing partner, and how beneficial that can be from a producing point of view.

As well as publicity and digital marketing, distribution is one of my great areas of interest in the film industry, so it was a real treat to hear from Peter Broderick, distribution expert, leading the charge in the “New World of Distribution”. His knowledge of distribution is so pertinent, I encourage you to go to his website and make sure you sign up to his mailing list. Peter was knowledgeable, but also incredibly approachable and engaging (and let’s face it- I’m always going to like someone who has a giraffe on their business card and penguins on their website!).

I would be completely remiss if I didn’t mention NZFC CEO Dave Gibson’s final address in this current position, where he announced additions to NZFC’s gender policy, which you can read here. It’s a step in the right direction to not only encourage women to participate in the film industry, but to continue to support women currently working in the industry as well.

If you want to see the entire line-up of speakers who attended Big Screen 17, you can look on the website. A massive thank-you to everyone involved in the weekend, from the Big Screen Symposium team through to the speakers, sponsors and everyone working behind the scenes to make things run smoothly. I look forward to attending next year.