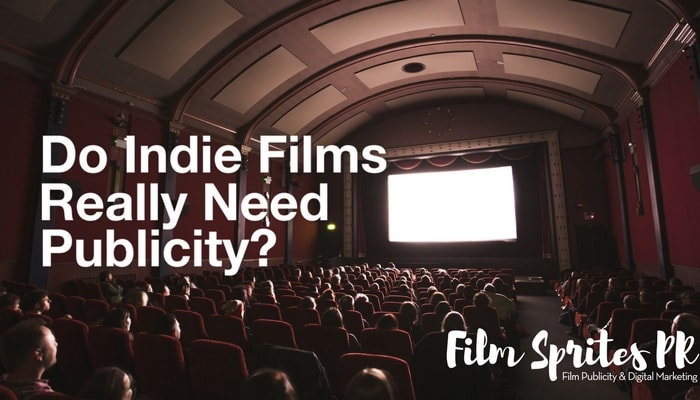 I know what you’re thinking.

Not exactly. Bear with me on this one.

When I started Film Sprites PR it was as a response to a need: there were independent filmmakers out there that had incredible films that deserved to be seen and appreciated by a wider audience. I wanted to be able to take my publicity and digital marketing skills and help them to connect with a wider audience and media who would support their vision. That is still a driving force in everything we provide here, down to blog posts that can (hopefully!) assist filmmakers with  hints and tips for publicity and digital marketing of their films. So I’m not going to sell you a pup- I’m going to be honest!

A few weeks ago I was so disheartened to see someone commenting on a forum thread, saying that there’s no point in having publicity for an independent film because unless it’s a studio-driven blockbuster it’s not going to get the “big” publications to post a feature or conduct an interview. But that’s the thing- the mainstream film industry (especially the big studios) has the benefit of publicity departments and unit publicists. Add to that a known director and a big-name cast and they have it made. But don’t forget: the directors and the well-known actors did not just pop out of holes in the ground, fully formed. They worked their way up. The same is true for independent filmmakers and up and coming actors.

And that’s one reason why independent films need publicity. Don’t think of it as “taking on the big boys”. It takes a long time to build a reputation and a body of work to progress in any field, and publicity can assist with that process.

You don’t necessarily need publicity for your indie film if you’re creating solely for your own enjoyment and the enjoyment of friends and family. However, if you went through the exercise I discussed in the last post and your goals are such that you would benefit from media placements and publicity, then yes- you need publicity.

Generally people will build their careers (regardless of what work they are in) on a solid foundation of proven work, and continue adding to that structure to build it sky-high. For entrepreneurs and the self-employed, the structure is built to the sky in part by things like referrals, word-of-mouth, advertising, publicity and testimonials from customers.

For filmmakers, assisting the solid foundation of your film work should be things like social media marketing and publicity in the forms of reviews, interviews and/or features.

I’ve seen people say to filmmakers: “oh you don’t need publicity. Social media’s where it’s at and you can do that yourself.” They’re half right. In the digital age, publicity has morphed into something different from what it was back in the middle of the 20th century. Publicity now encompasses both traditional and digital media, due to the fact that digital media is so readily accessible now. And while social media is fantastic (especially for indie filmmakers), the ability to source reviews, secure features in publications (both online and offline) and be interviewed is invaluable.

So what are the benefits of having publicity and social media marketing if you are an indie filmmaker?

Soon, we’ll share with you the advantages of having someone handling your publicity and digital marketing for you. In the meantime, why not check out the podcast interview I did with Dave Bullis about marketing of indie films? Dave has interviewed the likes of James Altucher as well as a fabulous array of incredible people working in independent films.